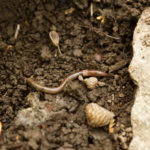 Wait, what? Worms are supposed to be good for the environment, right?

Unfortunately, it’s not that simple. All worms in Wisconsin are technically invasive. Worms were wiped from the Great Lakes’ landscape by glaciers that receded just 15,000 years ago. European settlers reintroduced worms such as nightcrawlers and red wigglers when they arrived. But while they can be helpful in our garden and farm soil, worms have been found to disrupt Wisconsin forest ecosystems by consuming the leafy duff layer that blankets the soil. However, even these exotic worms are no match for the latest annelid invader: Asian jumping worms.

What is a jumping worm?

Jumping worms (Amynthas spp.), also known as snake or crazy worms , are native to East Asia and probably traveled to the US in soil on horticultural plants. Currently found in 21 states, they were first found writhing in Wisconsin in 2013 at the UW Arboretum. Wehr has had a population in our upland woods since at least 2015. Unlike our familiar worms, the East Asian jumping worm does not burrow so they are easy to see when you brush away leaves or mulch from the soil. They have brown bodies and a distinctive white band near their head. They cluster together so you will usually find a mass of jumping worms. To make sure you have a jumping worm pick it up because they really do jump! Watch how they move in this video:

How did these worrisome worms spread to Wehr? Probably as cocoons hidden in mulch or soil. Jumping worms cannot survive winter as adults, but they deposit hundreds of egg filled cocoons in the fall. These eggs hatch in early spring and the tiny worms grow large enough to be seen by June. Once they are introduced to a forest or garden they take over quickly. Adult worms don’t need a mate to reproduce ( a process called parthenogenesis) so they can fit in two generations each summer. Look for them in September/October when their populations are at their peak.

Jumping worms are voracious eaters of dead leaves and will sometimes even eat the roots of living plants! And since they don’t burrow, their nutrient rich castings accumulate on the soil surface, creating a texture that looks like coffee grounds or ground beef. The soil becomes depleted of nutrients and more prone to erosion because of the “hyper” rate at which they decompose leaf litter and mulch.

What Can You Do About Jumping Worms?

Research is ongoing, but so far scientists have not found a practical method of removing jumping worms once they are established, so prevention is key. Here are some tips to prevent their spread: